Three times a year a specialized group of medical and public health experts meet to review scientific data related to vaccine safety and effectiveness. This group, known as the Advisory Committee on Immunization Practices (ACIP), has an enormous responsibility.  They establish, update and continually evaluate all the vaccine recommendations that are made in the United States for infants, adolescents and adults. Health insurance coverage of vaccines is based on these recommendations and the ACIP guidelines are considered the gold standard among healthcare providers.

Last week, in their second meeting of 2016, the ACIP discussed cholera, meningococcal, hepatitis, influenza, RSV and HPV vaccines, as well as the safety of maternal Tdap immunization and the laboratory containment of Poliovirus Type 2.

Below you will find a recap of the highlights of the June 2016 ACIP meeting to help keep you informed of the latest ACIP recommendations and considerations.

The most significant and somewhat surprising decision that occurred during last week’s ACIP meeting was that the Committee voted in favor of an interim recommendation that live attenuated influenza vaccine (LAIV), also known as the nasal spray flu vaccine, should not be used during the 2016-2017 flu season.

The vote followed an extensive review of data investigating the effectiveness of the nasal spray flu vaccine over the past three flu seasons.  The data showed vaccine effectiveness for nasal spray vaccine among children 2 through 17 years during 2015-2016 was only 3% effective (with a 95% Confidence Interval of -49-37%). In comparison, flu shots had a vaccine effectiveness estimate of 63% against any flu virus among children 2 through 17 years (with a 95% Confidence Interval of 52-72%). This estimate clearly indicates that while no protective benefit could be measured from the nasal spray vaccine in this past season, flu shots provided measurable protection in comparison.

The disappointing vaccine effectiveness data for the nasal spray vaccine during the 2015-2016 season follows two previous seasons (2013-2014 and 2014-2015) that also showed poor and/or lower than expected vaccine effectiveness for LAIV.  (More information about past LAIV VE data is available here.) 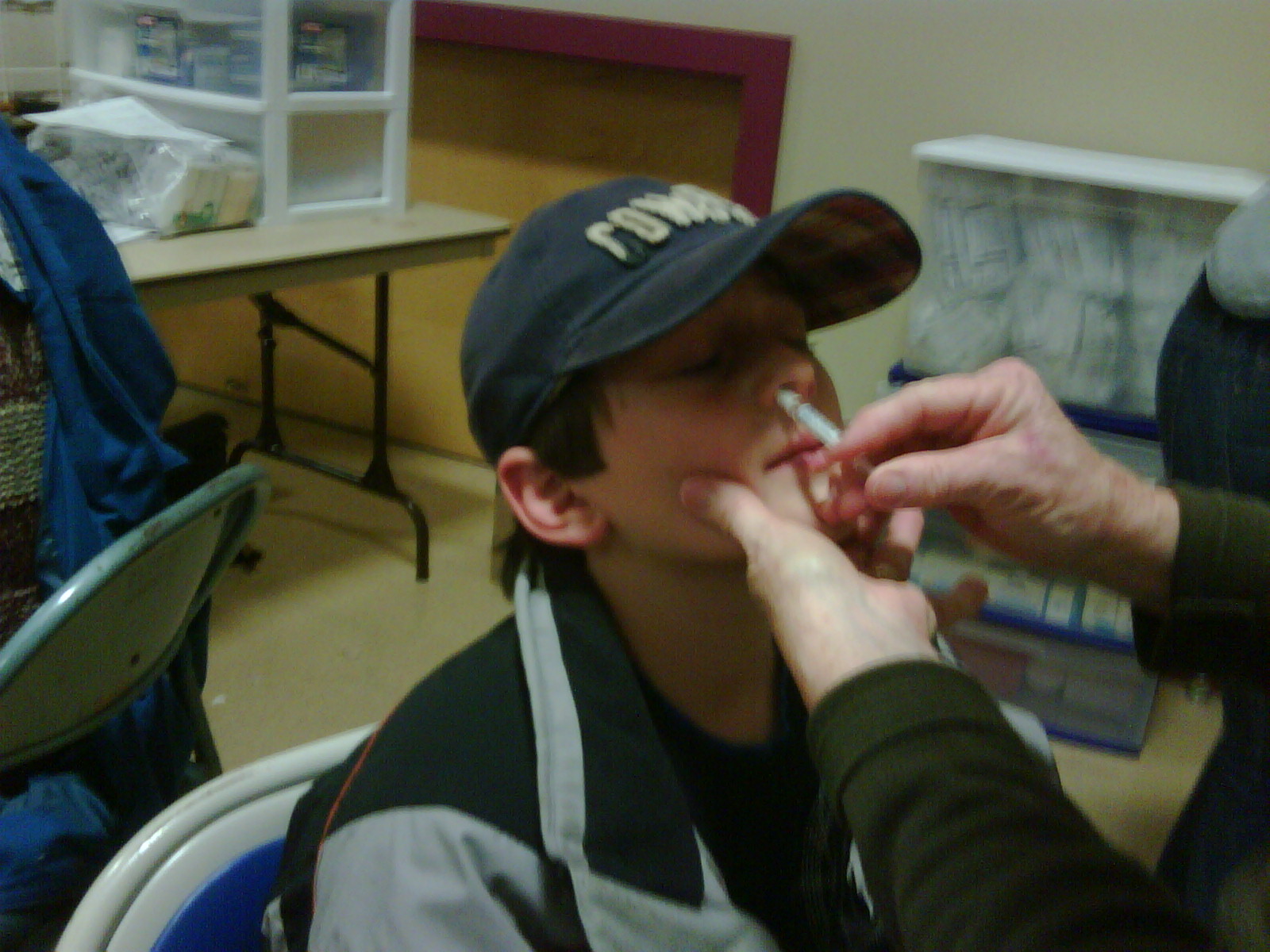 While it’s disheartening to see data suggesting that the nasal spray flu vaccine did not work as well as expected, the data did suggest that flu shots did perform well and offered substantial protection against influenza this past season. Some patients prefer the nasal spray flu vaccine due to an aversion to needles and may be disappointed in this vote. However, the action taken by the ACIP  emphasizes the important role they fill in continually measuring and evaluating vaccine effectiveness.  Only after a thorough review of the latest scientific data and discussion among the Committee do they decide to alter vaccine recommendations to ensure that they are in the best interest of the public’s health.

ACIP continues to recommend annual flu vaccination, with either the inactivated influenza vaccine (IIV) or recombinant influenza vaccine (RIV) for everyone 6 months and older and the CDC expects that there should be no shortage of injectable vaccines.  However, it should be noted that with the ACIP vote the nasal spray flu vaccine should not be used during the 2016-2017 season and therefore should not be offered by providers or clinics and will not be covered under the Vaccines For Children (VFC) program.

A vote was taken to recommend the vaccine for people traveling to high risk areas.

The first part of the discussion of meningococcal vaccines was a consideration of the data on the serogroup B vaccine Trumenba.  This particular vaccine is currently administered on a three dose schedule, however Pfizer’s Dr. Laura York indicated during her presentation that the FDA has approved both a 2 and 3 dose schedule based on the data showing both schedules to be considered safe and effective.  While immunity data suggests that the 3 dose schedule may confer slightly greater immunity over longer periods of time, the 2 dose schedule would be considered optimal in the case of an outbreak or when it is important to confer rapid immunity.   The committee will be reviewing more data on the duration of immunity and the safety of a 2 dose versus 3 dose schedule at the October meeting, before a formal recommendation is made for persons at increased risk, for use during outbreaks or for all healthy adolescents.

Further discussion of meningococcal vaccine centered around considerations for use of MenACWY in HIV-infected persons. MenACWY refers to the vaccine which protects against A,C, W and Y strains of meningitis. There are approximately one million people living with HIV in the U.S., about 2,000 of those children. Approximately 40,000 new cases of HIV are reported each year.  It was estimated that about 50% of these individuals receive regular care in HIV clinics that also regularly administer other recommended vaccines.

A growing body of evidence supports the belief that there is increased risk of meningococcal disease among HIV infected person, who are more likely to contract C,W, and Y strains.  Unfortunately, their vaccine response is less than optimal.  However, because HIV infected persons represent a small defined population that often receive regular care, the Committee concurred that a meningococcal vaccine recommendation of MenACWY would be feasible and not represent a significant cost burden.

Therefore, the Committee unanimously voted to recommend routine MenACWY vaccine in those patients greater than 2 months of age with HIV.

Back in February, the ACIP began reviewing data from various 2 dose HPV vaccine trials in order to determine whether it would be appropriate to change the 9-valent HPV recommendation  from the current 3 dose schedule to a 2 dose schedule.  At this June meeting, the ACIP reviewed further evidence that will be needed in order to proceed to an anticipated vote on the subject in October.

In regard to duration of protection, multiple studies showed at, or near, 100% efficacy after 8 to 10 years, and no evidence of waning protection after a 3 dose schedule through 10 years post vaccination. Several long-term studies of the 3 dose schedule will eventually provide data at 14+ years, however that data is not yet available for the 2 dose trials.

In a review of immunogenicity, several long-term studies for a 3 dose schedule showed a high seroconversion rate of greater than 97% and the presence of antibody titers post vaccination being higher than natural infection.  In a 2 dose phase III trial of the 9-valent HPV vaccine, the 2 dose schedule in 9-14 year old girls and boys was as immunogenic as a 3 dose schedule in 16-26 year old women.  The trial will continue for two more years to assess antibody persistence and an additional dose will be given at month 36 to assess immune memory.

In a review of the effectiveness of a 2 versus 3 dose schedule, ten studies found that the 2 dose schedule may be slightly less effective as compared to 3 doses, but all these studies administered the vaccine on the three dose schedule interval with doses at 0, 1 month or 0, 2 month intervals.  However, in four other studies which used a longer interval between vaccine doses (0, 6 months apart), the schedule appears to be more effective and more similar to that of the 3 dose schedule.

The Committee also heard reports pertaining to the modeling and cost effectiveness of a 2 versus 3 dose schedule.  Before a vote can be made, the Committee must take into consideration what the impact of a change in scheduling would mean to vaccine efficacy, duration, cost effectiveness and even uptake (considering the possibility that a two dose schedule may increase uptake).  Based on the extensive modeling that was presented, it is predicted that a 2 dose schedule will have similar benefits as a 3 dose schedule in terms of duration of protection and efficacy, unless the vaccine coverage rates change dramatically.  Additionally, a 2 dose schedule is expected to represent a cost savings, if the vaccine protection extends greater than 20 years.

It should be noted that many other countries besides the U.S. are already using a 2 dose HPV schedule.  In addition to the data from these countries, and the many studies examined during this meeting, the Committee is expected to receive even more information prior to the vote that is expected at the next ACIP meeting in October.  The complete slide deck of presentations will eventually be posted as a link on the ACIP page of the CDC website for more detailed review.

To identify where the type 2 specimens exists, an extensive national survey was conducted and the report was shared with the ACIP at this most recent meeting.  While most research labs work with type 1 polio virus, some of the challenges in containment of type 2 polio virus include the fact that samples are not always identified by serotype and in some cases sample contain that multiple serotypes, which makes containment of one specific type very difficult.

The ACIP will continue to receive reports as the containment process proceeds in the future.

Respiratory syncytial virus, or RSV, is a respiratory virus that infects the lungs and breathing passages and can be very serious for infants and older adults, for whom a vaccine is currently being investigated.  The ACIP is currently trying to improve surveillance and assessment of RSV disease burden in older adults.  There appears to be about 177,000 hospitalizations and 14,000 deaths annually in adults over 65.  A vaccine recommendation is expected to occur for older adults in 2018, pending licensure by the Food and Drug Administration of a new vaccine.

Since the disease burden appears to be quite high in infants, the likely scenario will include vaccination during pregnancy or maternal vaccination, which can also prevent a mother from transferring RSV disease to her infant after birth.  Vaccine licensure for pregnant women is currently in trials and will not occur until some time after the vaccine is considered for recommendation for older adults.

The ACIP continues to review the safety of maternal vaccination.

Data from the Vaccine Adverse Event Reporting System (VAERS) was analyzed by the CDC and there were no increased risk or poor outcomes to children born to mothers who received Tdap vaccine in pregnancy.

A review of the Vaccine Safety Data followed 324,463 pregnancies, 13% of which received Tdap in pregnancy and maternal age, race and ethnicity were similar.  While it is typical that more than one vaccine is given during pregnancy, the study eliminated anyone who had been vaccinated with anything other than Tdap vaccine.  The study found no difference in birth defects between those given Tdap before 14 weeks gestation, or 27-36 weeks or any time in pregnancy.  The results determined that maternal Tdap vaccination during pregnancy was not associated with increased risk for birth defects, including microcephaly among live birth offspring.

During the Pertussis Work Group update, Art Reingold reported that the Committee continues to review new data on Tdap to ensure the ongoing safety of the vaccine, optimal vaccine intervals, as well as vaccine use in the elderly, pregnant and breastfeeding women.

Currently, the vaccine is administered to pregnant women in the third trimester to maximize the antibody response and passive immunity passed on to the infant. However, new studies may suggest that it is better to be given in the second trimester and the UK is already changing their recommendation.  In October, the Committee expects to discuss timing, safety and a consolidated ACIP statement that addresses these considerations.

The next ACIP meeting will be held in October. Meeting dates and proposed agendas are available in advance. All meetings are open to the public and available via live webcast, public comments are accepted, and past meeting notes and slide presentations are accessible online.